When it comes to sunlight, any dermatologist will tell you a little goes a long ways. But who would have thought the same warning would apply to solar cells — the collection vessels for energy from the sun.

A mysterious fact that has plagued the research community for more than 20 years. Discovering how that degradation process takes place is essential to the advancement of solar cell research and the ability to produce lower-cost electricity from sunlight.

Sun damage “The basic problem is that when you put solar cells in sunlight, the efficiency starts to decrease by as much as 15 percent to 20 percent over a period of several days,” says Rana Biswas, a physicist at Ames Laboratory and Iowa State University’s Microelectronics Research Center. “Obviously, that’s not good.”

He notes that it’s possible to reverse the effect by heating the solar cell material in an oven to 170-200 degrees Centigrade, but adds that’s not possible to do in practice. Solar cells made from hydrogenated amorphous silicon, a noncrystalline form of silicon, absorb light far more effectively than traditional crystalline silicon solar cells. “Instead of a thick, 20- micron crystalline silicon film, you can just deal with a very thin, half-micron amorphous silicon film,” says Biswas. “These cells are more cost-effective as they involve much less material and processing time — driving forces for industry.

However, although amorphous silicon absorbs light very efficiently, it suffers from this degradation effect — that’s the bad news.” Biswas and his co-workers, Ames Lab visiting scientists Bicai Pan and Yiying Ye, have been studying the troublesome degradation effect, also known as the Staebler-Wronski effect, for the past few years. The research includes investigations into the atomic origins of the S-W effect and the subsequent exploration of possible new solar cell materials through computer molecular dynamics simulations.

The work is part of both the Beyond the Horizons project and the National Amorphous Silicon Team effort within the Thin-Film Partnership Program, both cost-shared development programs of the DOE’s National Renewable Energy Laboratory. A “bonding” experience Biswas explains that exposure to light can cause changes in hydrogenated amorphous silicon, resulting in defects known as metastable dangling bonds — bonds that can go away only when heated to a high temperature. Dangling bonds are missing a neighbor to which they can bond.

To remedy the situation, they will “capture” electrons, reducing the electricity that light can produce and decreasing solar cell efficiencies. “The question,” Biswas says, “is how does light create the dangling bonds?” With the development of their three-step atomistic rebonding model, Biswas, Pan and Ye are well on the way to resolving many puzzling aspects of the problem.

Our best performing solar panel at deflecting the damage from Sunlight is the Seraphim Solar Panel. Click here for more info.

The model is based on rearrangements of silicon and hydrogen atoms in the hydrogenated amorphous silicon material. In the first step of the threestep process, sunlight creates excited electrons and holes (vacant electron energy states) in the material. When the electrons recombine, they pair up with holes on the weak silicon bonds.

The recombination energy causes “Sunproofing” Solar Cells Computer simulations help explain why solar cells degrade in sunlight This computer simulation shows the breaking of weak silicon bonds in hydrogenated amorphous silicon. In the figure on the left, the weak bond (WB) between atoms c-d has broken, creating, in the figure on the right, a dangling bond (DB) on c and a new bond, d-x, which results in a floating bond (FB) at x.

Rana Biswas may have found the answer to why solar cells degrade in sunlight and has developed computer molecular dynamics simulations to describe the three-step process. 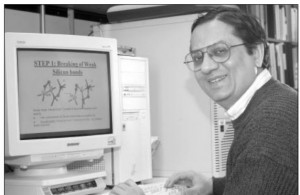 Pictured on the computer screen is an image representing the first step in his network rebonding process — the breaking of weak silicon bonds in the hydrogenated amorphous silicon solar-cell material. the weak silicon bonds to break, creating silicon dangling bondfloating bond pairs.

Others “hop” away from the dangling bonds and are annihilated when hydrogen atoms in the network move into the floating bond sites. Biswas’ three-step rebonding model shows that defect creation in hydrogenated amorphous silicon solar cells is initially driven by the breaking of weak silicon bonds followed by the rebonding of both silicon and hydrogen sites in the material.

The research represents a significant achievement in understanding the atomic origins of the lightinduced degradation effect in hydrogenated amorphous silicon and so provides a vantage point for eliminating this effect in the development of new solar cell materials — a task Biswas is now addressing.

“The basic problem is that when you put solar cells in sunlight, the efficiency starts to decrease by as much as 15 percent to 20 percent over a period of several days. … Obviously that’s not good.”

A splendid blend To improve the efficiency and reliability of solar cells, Biswas and Pan are investigating mixedphase solar cell materials that consist of clusters of nanocrystalline silicon embedded in an amorphous matrix. “One of the most promising developments has been the success of hydrogen-diluted materials grown at the edge of crystallinity — the phase boundary between microcrystalline and amorphous film growth,” says Biswas. “Our findings show that the crystallites make the mixed-phase materials quite stable, with the exception of the grain boundary region.

There’s a great deal of strain at the grain boundary because of the mismatch of materials, so we have a lot of excess hydrogen in the grain boundary,” he explains. “The role of hydrogen is critical because weak silicon bonds, dangling bonds and floating bonds are all removed by hydrogen insertion.” The mixed-phase materials and solar cells made from them have a much greater stability to lightinduced degradation than traditional amorphous materials.

By developing molecular dynamics computer simulations, Biswas hopes to learn more about the mixed-phase materials at the atomic level and discover what aspect or aspects of the materials are responsible for the improved properties.

His research efforts may even extend to manipulating the nanoscale structure of the material, allowing the design and creation of improved solar cell materials. ■ Research funded by: DOE Office of Energy Efficiency and Renewable Energy, Office of the Solar Energy Technology Program INSIDER / April 2003

Highly recomend to anyone looking at having solar installed. Whole system was installed within a week and is of very high quality, both product and install. The guys even went as far as cleaning the leaves from my old system and raking them into a neat pile on the front lawn. Clear and responsive communication with Scott before and after install and was given honest suggestions on what system would best suit my household needs. Would not hesitate in using their services again.