You Are Here: Home / SOLAR NEWS: Our Blog / Uncategorized / Property buyers believe Solar Panels add value to a home
May 10, 2015 Daniel No Comments

Do solar Panels add value to a home in the Real Estate Market?

In a recent survey conducted by origin energy and in conjunction with real estate.com.au revealed that over 80% of respondents confidently suggested that houses with solar power systems were likely to be worth a lot more money. Solar power systems simply increase the value of a property!

Solar systems are also considered to be the best “green” addition to the value of a house.

75% of people who rented said they would be over the moon if they were to live in a house with a solar system installed. This means that Gold Coast property investors can achieve a higher rental yield for their property. 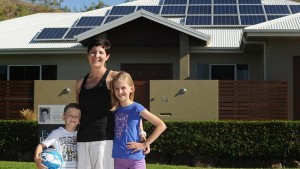 Solar panels definitely add value to your home, EVEN if they are visible from the street!

Nearly 80% of the people who took part in the survey even claimed that a solar system would add around $10,000 to the price of the property.

Nearly 80% of real estate investors claimed that a solar system adds nearly $10,000, then you would be mad not to install a quality 6 kW solar system consisting of Tier 1 solar panels and an SMA inverter for under $6000!

More astonishing, over 70% of survey respondents agreed that a home with a solar power system already installed was a very attractive feature of the home sale.

Adding Solar panels to a Brisbane House and Land Packages?

We are more than happy to help investors choose the right solar power system to add to their Gold Coast or Brisbane House and Land Packages. We work with a quality range of developers from Northern Rivers region, right up to the top of the Sunshine Coast

Origin and real estate.com.au have now said that it is obvious that solar panels at a great deal of value to a home.

Even renters were people who took part in this survey. And nearly 50% of renters made good on the claimed that they would be more than happy to pay at least $10 more per week to live in a house with a solar system installed.

I personally don’t think that it is best to install a solar system just to sell a house.
However, Phil Craig from origin energy reckons that installing a solar system just before planning to put your home on the market is a good idea as the solar panels a if the home an opportunity to stand out and sell in a overcrowded real estate market. I think this Phil Craig Guy is just trying to sell more solar panels were origin.

I definitely don’t recommend installing a solar system just to sell the house. Not in May 2015. Anyway.

Other notable green features that can be added as a feature or feeding in a home, and were perceived to add very to a home included energy efficient appliances,’s a solar hot water system, water tanks and also water-saving features.

If you are looking for a good solar panel system in Brisbane, definitely give Queensland solar and lighting a call or email.

Highly recomend to anyone looking at having solar installed. Whole system was installed within a week and is of very high quality, both product and install. The guys even went as far as cleaning the leaves from my old system and raking them into a neat pile on the front lawn. Clear and responsive communication with Scott before and after install and was given honest suggestions on what system would best suit my household needs. Would not hesitate in using their services again.