If you are reading this, then probably you’re thinking to yourself which among the two is better for installation to serve your purpose while being cheaper and reliable. Through this article I will try to provide you insights on which of the two inverters you should go for depending on your necessity. 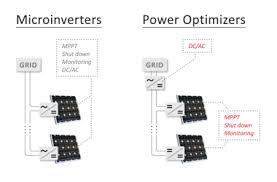 The most commonly and traditionally used inverters are the string inverters. They are widely used mainly because of their low cost and easy market availability. Though it poses some hurdles as the output is not optimized and reduces dramatically when temperature changes occur.

Ways of connecting a solar panel together

If you use a battery ready solar system and yours is an un-shaded roof, then the most convenient choice would be a conventional string system inverter.  But if yours is a multi-faceted roof then the conventional string inverter would not yield the optimum result and you are basically left with these two choices:

They are designed in such a way that they can be attached to every solar panel on your roof.  The current from these panels are converted and is transmitted at 240V AC from each micro-inverter which are connected in parallel. This connection is directly connected to the switch board for your utilization.

These are DC/DC converters which are connected to each PV module thus replacing the traditionally used solar junction box. They increase the energy output by constantly tracking the maximum power point (MPPT) connected to each module. The generated power is transmitted at a high DC voltage (200-550V DC) which is then converted by the inverter into AC

We now have the basic knowledge about the functioning of these two systems. Here I will compare some of the key factors such as price, efficiency etc. to give you some more ideas as to which of these two will serve you better.

The price of an optimizer is lesser than that of a micro based system (including the inverter and DC protection gear) although recent technological advancements are closing the gap quickly.

Micro inverters use plug and play connectors and are faster. On the other hand optimizers may require Dc cabling protection equipment on the roof.

Both micro inverters and power optimizers yield a marginally higher efficiency than string inverters as they optimize the panel output individually. The difference between these two is so minuscule that it’s not worth considering.

For larger commercial installation optimizers prove to be advantageous as larger string inverters get cheaper as they get bigger and ‘double optimizers’ can parallelly take input from two different panels and further provide more benefits.

High voltage DC continues to be a threat while working with power optimizers. Whereas micro-inverters don’t allow the passage for DC. It is immediately converted to AC.

It’s clear that there’s no clear leader among the two. We’ll have to wait and watch what the technological advancements in the future has to offer.

I would like to conclude by saying if you are considering something of cheaper price then go for optimizers and if you are planning on a lifetime use then micro inverters should be your choice.

Safety: You should research this better on what happens with an Optimized system compared with M/I at shut down and some other circumstances. Optimizers also are plug and play…