JFY INVERTERS have turned horrendous, like many CHINESE COMPANIES before them, They are good for a period of time, then BANG – ALL of a SUDDEN (Like Growatt – Read Here) they STOP RETURNING OUR PHONE CALLS and EMAILS, AND HELPING CUSTOMERS who have had their JFY INVERTER stop working and want after-sales assistance. Effectively meaning that their 5 or 10 year warranty doesn’t mean a thing if your solar provider/Electrician or JFY don’t want to know about the issues that your Faulty JFY inverter has!

A message to JFY Inverter customers and installers, WE ARE NOT JFY – Please do not contact us in regards to a JFY fault in Woop Woop, SA or QLD, or VIC or wherever you are. We feel your pain also, but unfortunately cannot help.. all we can say is ‘keep at them’ – We are not JFY

JFY were doing so well for the best part of nearly 4 years in Australia, but now, they have become like all other Chinese Inverters before them, HORRENDOUS for AFTER SALES SUPPORT AND SERVICE.

DO NOT – UNDER ANY CIRCUMSTANCES – GET A JFY INVERTER for a solar system in 2015!

THE FOLLOWING TEXT DOES NO LONGER APPLY – JUNE 2015 – JFY HAS REALLY DROPPED THE BALL – We suspect they are getting out of the SOLAR INVERTER GAME IN 2015!

JFY Inverters have been proven to be the best Chinese inverter on the market for some time now!

While we have been in the solar game for quite some time now, we have seen our fair share of absolute garbage inverters, and a few that are considered absolute rare gems!

OUR JFY INVERTERS NOW HAVE A 10 YEAR WARRANTY STANDARD!

The Jfy is a sound piece of equipment. Very reliable, top performance (even out-performs SMA in local area)

My quarterly electricity bill is only around $600 per Quarter, Do I really need a 6kw solar system? This is the JFY SOLAR DOG – Wireless Monitor – Please call or email us if you would like to buy one. S199 delivered

Coupled together with the WIRELESS SOLAR DOG, it really is the inverter with all the bells and whistles at more than half the price. We now have WIFI- ADAPTER PLUGS in STOCK!

We now have the JFY WIFI Adapters in stock! $250 – Postage included

Why buy a JFY Solar inverter Vs German SMA or Aurora inverter?

Because it comes from China! – Not a bad thing, your Iphone or Ipad does too remember!

It is such a blessing to install on a hot summers day, clicks in, mounted all within half the time an Aurora is mounted and is up and firing!
I would recommend the JFY Inverters to any potential solar customer. They are the best chinese inverter you can get I say. Make sure you copmpliment your JFY inverter with a JFY Solardog Wireless monitoring device.

Trannergy, SAMIL, AURORA (SO OVERRATED!!), Delta, Growatt… – ALL TERRIBLE, and we will not install, even if you insist. We believe we know better than your neighbour/friend/family member. 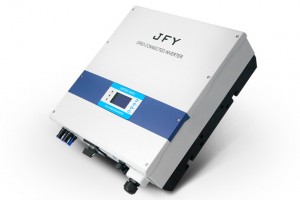 The JFY inverter is a very good inverter!

But we have been told to only use German inverters?

What a load of shit!!

Do you only drive German cars?

Seriously, surely you would stop and ask yourself, ‘why do chinese inverters exist?’

They exist because they work! If they didnt work do you think we would install them?

Do you know how much money we lose having to go out and replace a faulty inverter?

IT’s TWO trips to the customers house, rather than just 1!

Obviously we would want to have done enough Testing and Research to ensure we are not installing everyone with cheap, nasty inverters!

It’s not in our best interest to go back a second time to your house!

Introducing the JFY 3 phase inverters, SUNTREE series. Here is what a happy JFY inverter had to say about an install for a 10kw systems on his Brisbane business, using a 10kw JFY Suntree inverter. We recently installed this Commercial solar power system in Sumner Park, Brisbane. This was a 10kw system using Luxpower Solar Panels and JFY 10kw Suntreei inverter. This is what it produced the very next day after installation!

The text below sadly no longer applies to JFY and their inverters!

The Manufacturer’s importers ALL replace the inverters and give $200 credit to the installer for doing so as well.

The warranties for JFY inverter is Paramount.

DO NOT BUY A JFY INVERTER!!!

I Hope you have enjoyed reading this JFY inverter review, as much as I have writing it. Let me know if you hate a good Chinese inverter, and for what reason. Or perhaps you will share with me, your love of your JFY 5000TL or JFY SUNTWINS 5000TL.

Had a solar quote from another company? check our 5kw solar system prices here!

GET A ROCKET UP YOU! – Stop thinking about it, Get a solar system.

AGAIN, I DARE YOU TO BUY A JFY INVERTER for your new SOLAR POWER SYSTEM!

Sorry Queensland Solar & Lighting, but under Australian Consumer Law, the supplier (YOU) are just as responsible for the warranty as the manufacturer (JFY)

Of course we help our customers and offer full warranty support to them! who do you think we are? crooks?!

What we mean by, ‘stop calling us, we are not JFY!’ is that there are many JFY inverter customers who have been installed by their own installer and solar company who are quite rightly frustrated, and go looking on the internet for JFY – Unfortunately we cannot be much help to that lot, like i said, usually live in woop woop too.

DO NOT BUY JFY NO MATTER WERE THEY COME FROM, THEY ARE CRAP…..

Are you a customer or installer? JFY were doing very good up until recently where they seem to have dropped the ball in terms of failure rate escalating and after-sales service.

JFY is very quick only to take the payment…after they take your payment they will deliver your order item not on your agreed date..they make so many excuses.

If it is out of warranty, you will need to call us and we will replace the inverter.

Just another sucker to JFY. Installers Solar Consultants and 5 Star Energy are no where to be found. Inverter failed and now 3 months and still waiting for replacement from Sydney office, none in Aus!!!

Yes mate, Solar Consultants and 5 star Energy were notorious for issuing JFY inverters before packing up.

ps
This was done in Brisbane.

JFY is the enterprise with good sense of its responsibility. JFY never stop doing the service. JFY has a continuous technology investment to improve its product quality. In 2017 it has released the second generation products Sunleaf, Sunceed , Suntree +. Much cheaper, more stable. The service status is difficult for JFY to handle because many old machines (made before 2013) burnt out to stop functioning, they are still within warranty, need replacement. You don’t expect that the Chinese technology in 2013 was as good as in 2017. It’s understandable why the service becomes too slow. But you have to admit that JFY is still there, you can find it and keep claiming, requiring for warranty service. You know some other suppliers just escaped from the market, disappeared, changed to a new brand… JFY doesn’t escape. JFY is still trying to do better.

Where are you based?

You may need to chase them, but they do get it done. They replaced mine in Oct 2018.

JFY is not worth having They fail to honour there warrant. I have had two inverters fail.

I have had solar installed back it 2014. Not even 1 month out of 5 years my inverter shit itself. My contract states that there is 10yrs on the inverter. I have tried numerous amounts of time to resolve this and have just been told it is out of warranty. Is a contract not a legal document anymore???