Renewable power has regained impetus in the global community in the recent years. Not being a mere theoretical subject anymore, it has in fact become a major development sector for both developed as well as developing countries. Huge projects have been launched in the United States, European nations like Germany, France, Switzerland, as well as top oil exporters such as the middle-eastern land of Saudi Arabia.

These projects have been initiated with the dual aim of making profits as well as reducing pollution. Greenhouse gas emission will go down considerably with this fundamental switch in source of energy. While there are strong influences advocating fossil fuel consumption, most of the smart and progressive minds have been staunchly supporting the renewable energy sector.

History has shown us that the best of ideas emerge from radically different thinking and are at first not approved of. A huge chunk of population that does not support renewable energy is demotivated by the costs. The pricing however shouldn’t be considered an expense but rather an investment in a modern future. Some of the brainiest minds on the planet support renewable energy. An amazing example of this is the Google solar power investment. 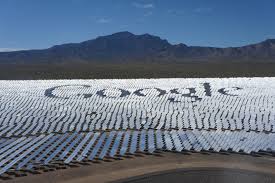 Google has acquired solar farms in partnership with an investment firm. According to high ranking personnel in the Google pyramid, the company believes that investing in renewable power is good for business as well as the environment. The collaboration aims at ushering in a new era of clean energy which is also affordable. The current project proposes to generate 106 megawatts which could easily power seventeen thousand households.

Google has been known for its modern approaches to almost all socio-economic aspects. Since the people working in the company are known to be the some of the smartest minds in the world, it is no shocker that they are more than willing to become a part of this new energy sector.

Some people are concerned that this may not be the wisest decision, and that solar power still has a long way to go before it firmly takes roots. Advocates of traditional methods of harnessing energy would still recommend coal and oil as effective sources. The facts however remain that even the most rigid thinkers have comprehended the necessity for using sources that are inexhaustible as chief mediums of energy.

The cost of harnessing renewable power as compared to fossil fuels too, is going to be less in a not so distant future. As the reserves of oil, etc. get scantier, the cost for digging them out of unexplored areas is going to be more than if we choose to utilize the option that is more easily available to us. The environmental hazards created by the heavy drilling will also be spared. Climate change will be globally impacted. The benefits of making the big switch are innumerable.

Many concepts tend to gain popularity when big names are attached to them. With Google stepping into this arena, one can only hope that the cause of renewable energy will gain momentum and progressive thinking will increase all throughout the international community.

This new project seems like a profitable venture that will save the environment as well as create jobs.