ENSURE THAT YOUR ‘MADE IN CHINA’ SOLAR PANELS DON’T GET A SUN BURN!

You Are Here: Home / SOLAR NEWS: Our Blog / Uncategorized / ENSURE THAT YOUR ‘MADE IN CHINA’ SOLAR PANELS DON’T GET A SUN BURN!
Aug 2, 2015 Daniel No Comments

“Made in China” has become the most trending label in all sorts of utility items. Clothes, crockery, electronics, you name it and this oriental power has a tag on its manufacturing. The quality of a lot of these products however, is quite questionable. Don’t get me wrong I am not trying to generalize all production of the People’s Republic as substandard. China makes some fabulous world class products but some are quite to the contrary.

While this Asian power has acquired a huge repute for itself in the renewable energy sector with its cost-effective technology, some of the solar panels coming out of this country are sheer junk. Solar panels have been China’s strong suit in this sector with prices lower than all its competitors. To maintain this standard must be a task especially since western powers have been forming alliances to reach comparable prices. 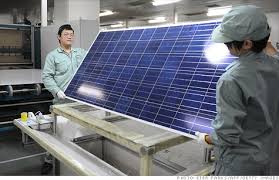 There are some recognized and well-known brands of solar panel manufacturers from China, but a lot of back-channelling of these goods has been going on in the business. Certain factories which have emerged from dump yards are using rejected panels of the Tier 1 manufacturers. They use low quality discarded material and make B and C grade solar panels from them and more often than not, they get away with it.

Many of the consumers have become rather tired of trying to identify the quality of these panels and prefer an easier way out. The solution being, use of solar panels that are not produced in China but in other places like Malaysia or Germany. Though this sounds like the best option, there is a disadvantage to it. Chinese panels, even the best quality ones as mentioned earlier are much cheaper than its other counterparts.

Most households and industries wouldn’t prefer to spend more of their hard earned money than required just to reduce fossil fuel consumption. There is another solution to the problem of identification of panels. In order to know which ones will last and which are the non-durable ones, all one has to do is ensure that it fits into a list of recognized Tier One brands which have received great reviews.

The Chinese Government has come out with a list of Approved solar panel manufacturers that in their opinion have been assessed well and comply with all the norms of their land regarding the subject. These assessments included checking environment conditions at the factories, quantity of cells converted, minimum capacities, etc.

After thorough evaluation, the government released a list of a hundred and nine battery, silicon and panel producers. Though a few people would challenge names on the long list provided by the Chinese government and experts may be sceptical of Chinese standards in the matter, most of these brands are globally accepted as Tier One.

Identification I agree is not as simple as it sounds, especially due to similar sounding names and attempts at copying major brand trademarks, but a little more vigilance could help save you some additional dollars.