A LITTLE SUNSHINE IN THE LAND OF TAJ MAHAL

You Are Here: Home / SOLAR NEWS: Our Blog / Uncategorized / A LITTLE SUNSHINE IN THE LAND OF TAJ MAHAL
Aug 3, 2015 Daniel No Comments

Solar energy has become the talk of town (at least in towns that are enthusiastic about renewable energy). A lot of countries have been in the news for their modern approaches to solar energy and attempts at reducing of fossil fuel consumption. Large scale projects are being set up all over the world including countries like Saudi Arabia which are popular for their plentiful oil reserves.

Technology wise, countries like China and Germany have been in the lead. China has been producing cost-effective solar panels, giving the competitors a hard time. Alliances are being formed between top European nations such as Switzerland and France to collectively produce better results in the field of solar power harnessing technology. If you were questioned as to where in the world do you think the largest solar utility project, what would your answer be? 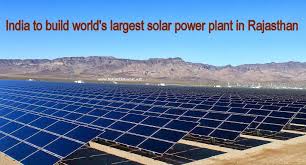 My first guesses would’ve included China, Germany, United States or even Australia. Much to my surprise, the right answer is, India! With all the progressive thinking in the rich and developed nations, the upcoming powers have been discounted. In the desert state of Rajasthan, India is planning a mega solar project. This isn’t a typical symbolic project to merely satisfy the renewable energy activists of the country. It is in fact a large scale investment in the sector of solar power.

SPECIFICS OF THE PROJECT:

The plan is proposed to be spread across 77 sq.km of land (larger than the whole of Manhattan if you wish to compare). Costs will be high, at least the initial investment of USD 4.4 Million. This will be a one of its kind project since it will be a minimum of ten times larger than any similar utility project. Till date India has never been seen as a top consumer or generator of solar power, but with this project in place it is soon set to be the ultimate solar power champion.

India’s carbon footprint will also be erased a little, since if this project goes as expected, it will reduce carbon emissions of the country quite considerably (4 million tons per year to be precise). This will create a positive impact on climate change globally. Power generation from this plant will be approximately 6.4 Billion Kilowatt hours per year. This will be the hugest utility plant in the field of solar energy globally.

Though currently India produces a meager 2208 Megawatts of solar power, it is taking a huge leap forward with this initiative. The country that boasts of being the world’s largest democracy will soon also be able to boast of harnessing maximum solar energy in the world. India is usually pitted against her neighbor China in matters of development, and this is probably her chance to take the lead in an upcoming sector of non-exhaustible power.

The country director for India in the World Bank said in 2014 that considering India’s advancement under the UPA Government, It deserved to be considered among the world leaders in solar power. That may be a title that India could achieve, if this particular project is executed well.

Will India stick to its plan of becoming the megastar of the renewable energy industry? This is a question only time (and the new NDA Government) can answer.